If you’re a gamer who has ever played city builders before, no matter how basic the game might have been, you can attest to the fun factor that it carries and the fact that your creativity is only limited by your imagination. Against The Storm takes that level of fun one step further and brings together a roguelike strategy and survival city builder that is simply ahead of its time and different from any other game that we have ever played before. Produced by Eremite Games, it is their first venture outside the mobile space and it seems like they have stumbled onto quite the gem here. But that doesn’t really answer the question of what makes it so specia.

I’m personally a huge fan of strategy games and city builders. But it is not often that you get to apply a big chunk of strategy along with a good amount of creative city building in a game. So when Against The Storm came out, the first thing that came to my mind was how the game would achieve what it has promised to its consumers. Thankfully, though, the game did deliver on the promise and manages to be a unique blend of strategy and city building elements. This is also the reason that we are talking about the game today because it does something that is simply different from everything else on the market.

So without much further ado, let us learn a little more about the game and talk about how you can procure it for your platform.

Against The Storm: About The Game

Against The Storm is a game by Eremite Games that is focused on the survival as well as the diplomatic aspects of of city builder games. Somehow, the game reminds me of Age of Empires where we had to take care of the prosperity of our city or Empire while taking care to be diplomatic and conquering other empires at the same time. It was a very interesting adventure and I expected the same from Against The Storm. Fortunately, the game was a pleasant surprise for me as it went above and beyond and offered such an intricate system of scaled difficulty and combat tactics that I simply hadn’t expected from it.

But in a nutshell, Against The Storm is a game where you protect yourself against the calamity by building yourself a city that can withstand anything while making sure that there is everything available at the same time and that you are prospering despite any problems.

Against The Storm: The Review 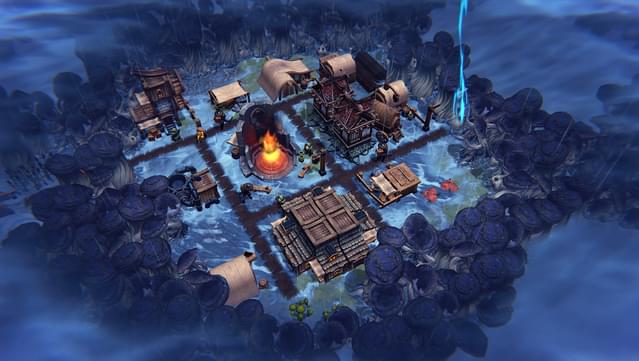 Now, you might be asking what it is about the game that is special. And the answer lies in the fact that the game manages to be challenging as well as entertaining at the same time. While the game is easy to get into and the entry barrier is quite low, what makes it interesting is the fact that those who are not really trained at the game will struggle with the tougher levels when the difficulty gets tough. So while it is easy to learn, it is just as difficult to master it, and that is what makes the game so attractive to people. The difficulty and the amount of strategy that the game employs is nothing short of special and that is something that draws people towards it.

In fact, the early access build of the game contained around 40 hours of content that was more than enough to stand up as a game on its own. More so, even the demo for the game contains around 40 hours of content. So there is no reason to fret when it comes to the length and quality of the content. The lore and the content that surrounds the world of Against The Storm weaves its own story and attentive players will be able to see and listen to it.

However, while the game is undoubtedly a great one, I’m not sure if it is one that would appeal to many people.

Against The Storm: The Verdict

While the game itself is very good, Against The Storm makes some people turn off of it because of its level of difficulty. While the game is easy to learn, it is really hard to master and that makes it kind of unachievable, at least according to the people.  So it is going to be a recommendation from my side, but not really a strong one.

You may check Against The Storm on the official website

Also, check out the trailer here:

If there is anything else that I might have missed. Do comment on it in the comments section down below.

Ghost of Tsushima Seems to Have Received the Final Patch!

Diablo IV: Return To Darkness! Know Everything About The Game.