Bhuj: The Pride of India: Trailer Released | Storyline | All You Need To Know

Bhuj: The Pride of India has been on the calendar for many Indian movie fans for quite some time now. Starring Ajay Devgn and Sanjay Dutt, Bhuj is going to be a blockbuster, and one we are looking forward to. The movie is one of historical nature and is sure to invoke feelings of patriotism within the countrymen. Which is also one of the reasons so many are looking forward to the movie. Based on the Indo-Pak War of 1971, the movie is about the heroes of the country, who fought for us and ensured our safety. Recently, the trailer for the movie was released, along with the release date for the movie. To find out more about the movie, and what the Bhuj: The Pride of India trailer holds, as well as the release date, keep reading the article.

Bhuj: The Pride of India Trailer: All We Know

The trailer for the new movie Bhuj is finally out. And it is as mesmerizing as one would expect it to be. It is one that is loaded with a lot of action, and would surely give you goosebumps. The energy is just out of this world, much like that of our military forces. The trailer showcases Ajay Devgn as the hero IAF Squadron Leader Vijay Karnik, the main hero of the movie. Karnik was responsible and accountable for the Air Terminal at Bhuj when the conflict arose. Caught in the conflict, he performed huge feats. The movie tells the story of how the Squadron Leader saved the area of Bhuj from the Pakistani army, by redeveloping and re-establishing the entire IAF air base, with the help of around 300 women from the nearby land of Madhapur. Inspirational, to say the least.

But that’s not all that is good about the movie. The movie brings in a cast that is sure to bring a smile on your faces and have you in awe. The movie has a really huge star cast and it is tough to really fall in love with one of the stars, because there are just so many! The movie, alongside Ajay Devgn in the main role, stars Sanjay Dutt, Sonakshi Sinha, Ammy Virk, Nora Fatehi, and Sharad Kelkar in big roles. We weren’t kidding when we talked about a star cast. Added to that is the fact that it is a patriotic film. Things just seem to be getting better and better for Bhuj: The Pride of India.

What The Creators Had to Say

In his statement recently, Bhushan stated, “This gutsy story should be told on the grounds that we need the current and the coming age to think about this courageous warrior, Squadron Leader Vijay Karnik, who assumed a critical part in India’s triumph in the 1971 conflict. He was adequately courageous to make this intense stride of including regular folks in a conflict. Likewise, who better than Ajay Devgn for the part of Vijay Karnik?“

Likewise, Ajay Devgn, the main star of the movie had some words too. “Bhuj is a genuine story dependent on genuine characters. I’m playing a Squadron Leader. It is a major scale film. The story rotates around how a small bunch of individuals stop the Pakistani armed force when the Indian armed force can’t contact them on schedule,“ the star said. 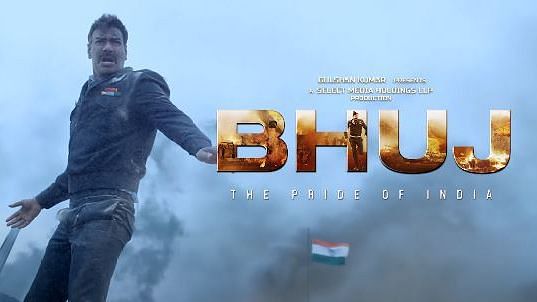 One of the many questions that come to the mind when talking about trailers is the release date. And we’re sure your mind is bubbling with the same question too. Fortunately, we now have a release date for the upcoming movie. The movie is slated for an August 13th, 2021 release on Disney+ Hotstar. That is less than a month away!

We’re really excited to see Bhuj come to the big screen and we are sure that so are you. So do watch the film when it releases on the OTT platform.

What do you think about the trailer? Are you excited? Does it bring out feelings of patriotism? Let us know in the comments down below.

Willard Grosshttps://thefranchisehound.com
Willard Gross is a content writer with an eye for detail. He loves to write and create, but he also enjoys reading and analyzing the work of others in order to critique it. With every sentence he writes, Willard strives for perfection: each word should be just right.
Previous articleBlack Panther: Marvel Brings Christopher Judge On Board
Next articleCASTLEVANIA SEASON 4 New Update Is Here Now