I’m sure that most of you here have played mobile games over the past many years since smartphones have become more of a necessity rather than a luxury. I know that I have, and I have grown to appreciate them for what they offer, even if it might not be the biggest thing ever. I still remember playing Clash of Clans every day on my mobile when the game first came out. In fact, even today, people still regularly play it and are ardent fans of the game. That is until the developer Supercell brought out its newest title Boom Beach Frontlines.

I’m sure that you have heard the name Boom Beach before if you are an avid mobile gamer. Supercell, the brain behind Clash of Clans, launched the franchise back in 2014 when it brought out a new game that would directly go up against various other games that would pit players against each other in a battle of strategy and wits. While their original game was already doing very well on the platform, they felt that they had to offer their players some variety and made a game that was set in a more muted and more realistic universe, unlike Clash of Clans. Hence, Boom Beach Frontlines is now coming into play.

Are you a big fan of strategy games? If you are, then I’m sure that there are so many other games that you must be curious about that you still haven’t discovered. If that is indeed the case, then I would highly recommend you to check out our blog as we post a lot of strategy games there.

Boom Beach Frontlines: About The Game Now, for those of you who are completely new to the world of mobile gaming or simply haven’t heard about the Boom Beach franchise ever before, I would highly recommend that you know a little bit about the game first. Boom Beach Frontlines, the newest game in the Boom Beach series by Supercell and developed by Space Ape Games, is a Strategy MMO game that puts you against players around the world as you battle it out on the beach using a whole lot of different strategies and powerful units.’

The game is basically a top-down stick shooter that puts you in the driver’s seat and aims to establish a sort of balance between a full-fledged game like that which we see on PC and a mobile game. The game itself is a 9v9 battle and features various modes like Conquest/Control modes which allow the players to win the match by establishing their supremacy over different areas of the map. This is somewhat similar to what we see on First-Person Shooters on the PC and consoles.

Coming to more familiar territory, when someone attacks your coast, you are not entirely left defenseless and bare for others to take over. Rather, just like Clash of Clans, you can build your own automated defenses that would simply crush the enemy soldiers and units. This is something that was a part of the Clash of Clans universe to a major extent.

Of course, no mobile game that is free is complete without in-app purchases. While Supercell has kept the entry to the game free, it offers and promotes its in-app purchases to the users in different forms. There is also the addition of a Boom Pass that offers different rewards and more experience points to the players, as well as the ability to play as a new character. It is not mandatory and you can freely go without it, but the developer highly promotes you to buy it. You can still take advantage of other mystery drops and boxes though. 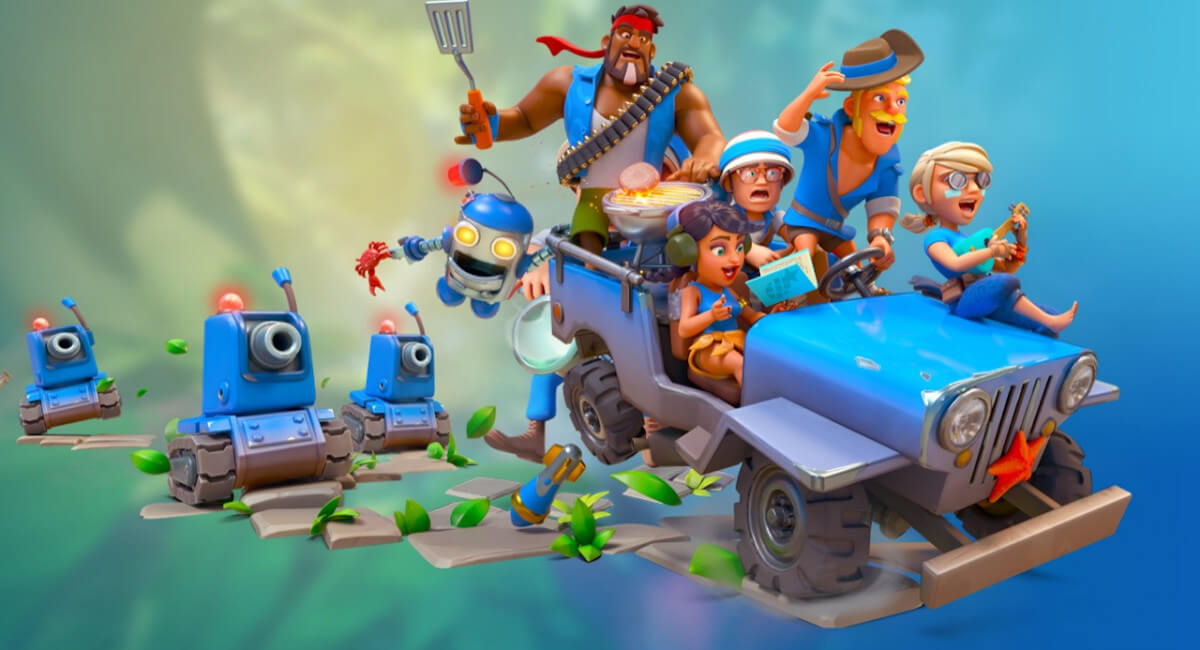 Now, you might be wondering whether Boom Beach Frontlines really is a worthy successor to the original Boom Beach from 2014. And I think that the answer would be a yes. Boom Beach Frontlines not only builds on, but also extensively expands the Boom Beach universe by introducing new modes, new characters, and new units. The game itself is not a rip-off of the original and has its own leg to stand on. The game is quick, easy, and can be understood by anyone. There isn’t much of a barrier that prevents players from playing it, and that is something that is really appreciable in a game. It has my wholehearted recommendation.

What do you think about the game? Did you like it? Let me know all your thoughts in the comments down below.