Outfest Los Angeles this year has been quite phenomenal. And it has been such a blast, especially with the first screening of Everybody’s Talking About Jamie. The movie, which was the opener for the fest, has been the talk of the town ever since it was showcased on the fest. Well, it is the talk of the queer town at least, that much I can tell you. And it’s my passion to talk the talk of the town, so here we are.

When I heard about Everybody’s Talking About Jamie, I just had to check out what the fuss was all about. The concept is just so wild and crazy and it sounds so glamorous, it was worth getting a look into. It is not that frequently that you get movies that are so forward looking and progressive, mostly because of the target audience. But Everybody’s Talking About Jamie breaks away from that.

While those who are ardent fans of such movies may find the concept to be quite unoriginal and downright uninspiring, I personally feel that there is a lot to appreciate about the foot that the writers have put forward here. It is an inspired movie and it is taking inspiration from classics, but to call it unoriginal would be very insulting to the efforts that the team has put into the movie.

I personally find the movie to be a breath of fresh air, despite the fact that it is highly inspired by previous popular movies in the genre such as The Prom, which tells a similar story about a similar teenager. In fact, I have even talked about the Prom in my article about Addison Rae’s debut in the film He’s All That. So you might want to check out He’s All That: The Addison Rae Debut because it is going to be right up your alley if you have come this far into the article.

Everybody’s Talking About Jamie: About The Film 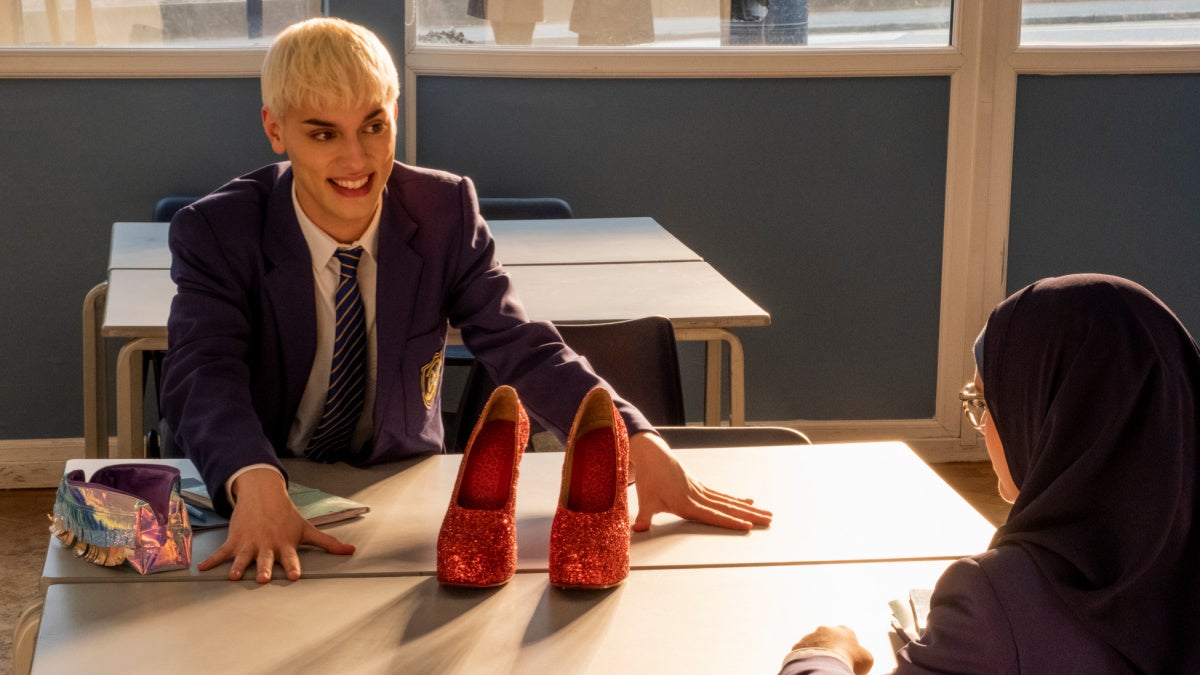 Everybody’s Talking About Jamie is a film about a queer kid Jamie who dared to be himself and had his story told. Inspired by the BBC documentary from 2011, Jamie: Drag Queen at 16, which talks about a teenager from a mining village who came out of the closet when he was just 14. When he turned 16, he decided to shake everyone to their core by attending his high school prom in drag. So the movie is inspired by a real story, and that is what makes it so powerful and inspiring.

Jonathan Butterell is behind the director’s chair here, and he does a phenomenal job in making this musical come to life along with Dan Gillespie Sells as the chief musician here. They both are an amazing team and it is with their collective efforts that Everybody’s Talking About Jamie really expresses itself as the proud movie that it is.

Adapted from the British stage musical, the team has made quite a few welcome adjustments for the movie. Here, Max Harwood plays the role of the unapologetically flamboyant Jamie, at 16. And I have to say that it is such a great casting decision and one that I really approve of. The character really comes to life under Harwood’s excellent artistry. And I really appreciate it.

The movie is not about Jamie coming out as much as it is about his rise to unapologetic fame that he earns for himself. He is the talk of the town and is an inspiration to all the people out there who feel similarly to him and want to come out of the closet. A true inspiration, I must say.

Talking about inspiration, movies about coming out and being yourself are all the rage these days, and for quite a good reason. They deliver a social message unlike any other. And one that benefits all of us, in a society where we are judged for literally everything. Boogie Nights: A Look At The Adult Film Industry is one such film that talks about the social issues that currently plague our society. I found the film to be quite insightful. And I’m sure that many of you will find it to be of immense importance to you too.

While many have already seen the movie at the Los Angeles Outfest, a majority of us still haven’t had a chance to watch the movie. And I have good news for all such people. The movie is going to be hitting your screens on September 17, 2021. The movie is exclusively going to be available on the Amazon Prime Video Platform. So get a subscription if this movie is on your watch list.

Talking about upcoming releases, there is another upcoming release that many of you might be interested in: Aquaman And The Lost Kingdom: Confirmed Release Date | Updates

With all that said, I would like to close by saying that I have a lot of hopes for this movie personally. It is a queer blockbuster that I am sure will blow the minds of all those who watch it with an open mind. And it is going to be especially popular in the queer community. So it is a big step forward in terms of acceptance of queer people and flamboyantly showing the world who they are and expressing themselves without much restraint.

I wholeheartedly support the message of the movie, and would highly recommend everyone to watch it when it comes out.

The movie currently holds a rating of 6.5 out of 10 on IMDb, based on multiple user reviews. IMDb is our preferred platform for all movies and TV shows.

What do you think about Everybody’s Talking About Jamie? Are you interested in the movie? What are your thoughts on the social message that it conveys? Let me know in the comments down below.

Willard Grosshttps://thefranchisehound.com
Willard Gross is a content writer with an eye for detail. He loves to write and create, but he also enjoys reading and analyzing the work of others in order to critique it. With every sentence he writes, Willard strives for perfection: each word should be just right.
Previous articleBased On: Three True Stories of Characters Who Influenced Films
Next articleGabby’s Dollhouse Season 2: Release Date, Renewal, All You Need To Know