Surrogacy is not really a topic of casual discussion in India. In fact, it is even taboo. So it is really a breath of fresh air when a slew of artists come together to combat that taboo through their art. After all, art is the source of many revolutions and cultural changes. The same seems to be the case with the new Mimi trailer. Although a film with entertaining and humorous undercurrents, Mimi is still a film with a strong social message. Which is why we’re so excited for it. It brings a social message and a change that we wish to see in society. Recently, the trailer for the movie was revealed, and told us a lot about the movie and what we can expect from it. We’re also sure you might be wondering about the release date for the movie.

So keep reading on to find out all that we know about the new Mimi trailer, including details like plot and release date.

Mimi Trailer: All About It

The trailer for the new film was recently released. And it was revealed by none other than the star of the show, Kriti Sanon. She released the trailer of the film where she stars along with artists Laxman Utekar and her co-star Pankaj Tripathi. The movie surely has a lot of talent behind it, and makes us really excited about the possibilities. The trailer for the movie revealed a lot about the plot for the movie. The movie follows Kriti Sanon and her character on a journey of surrogacy. The movie follows the plot as Kriti’s character is approached by Pankaj Tripathi for carrying a surrogate baby for an American couple. When Mimi, Kriti’s character finds out that she doesn’t have to be there for the conception and would be paid 20 lakh rupees, she agrees.

And that is where all the fun really starts. While she has made the decision to carry the baby, there are a lot of factors to consider. How will she explain the entire situation to her parents, and how will she handle everything? But a ray of hope is seen when Sai Tamhankar proposes a solution for her problem. He proposes for Kriti Sanon and Pankaj Tripathi to pose as man and wife, and keep up a facade. Needless to say, things aren’t that simple and a load of entertainment and humourous situations come face to face with the viewers.

And that is where everything takes a serious turn. As the couple who had originally asked her to carry the baby backed out from their agreement and asked her to have an abortion. In her state of panic, she tells her parents that Pankaj Tripathi is the actual father of the baby. But how will she explain what happens after?

What Kriti Sanon Had To Say 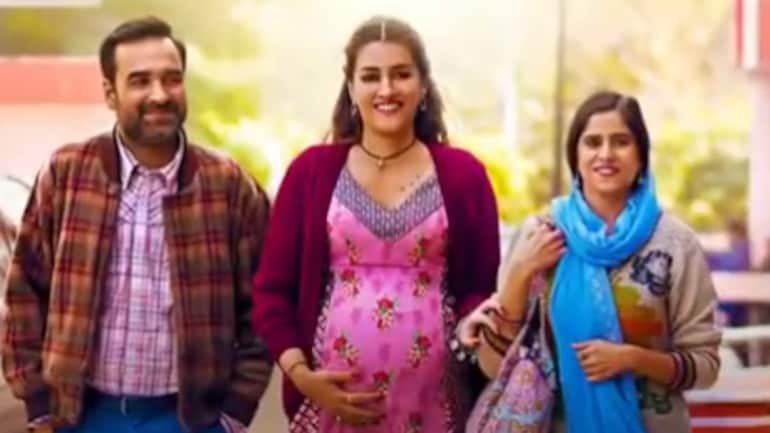 Kriti Sanon was the one who revealed the movie to the public. Taking to her twitter handle, she stated, “#Mimi expected everything, except for this unexpected journey! Watch the glimpse of her unexpected story with your family. #MimiTrailer out now.”

She also had a lot to say about the movie and the character that she plays. She explained that while the movie might sound very serious from what we’ve seen, it is anything but. It is not at all a documentary film. In fact, it is an entertaining film with lots of jokes and hilarity, and a lot of ups and downs and twists. She also explained the journey of her character Mimi, who wants to be an actress.

“It’s not preachy or serious. It’s not like you are going to watch a film on surrogacy and it’s going to be a documentary film. It’s a very entertaining film, filled with humour, and a lot of ups and downs. There’s a beautiful graph of the woman I am playing, Mimi, where she wants to be an actress,” Kriti Sanon stated.

With every movie trailer reveal readers of our blog always expect a release date. And the same must be the case with this one. And we have good news for you. We have a release date for the movie. And it’s almost here! The movie is supposed to release on the Netflix and Jio Cinema platforms on July 30th. So stay tuned in on July 30th to catch the film first!

What do you think about the trailer? Does it look like a good film to you? Are you excited for it? Let us know in the comments down below.

Willard Grosshttps://thefranchisehound.com
Willard Gross is a content writer with an eye for detail. He loves to write and create, but he also enjoys reading and analyzing the work of others in order to critique it. With every sentence he writes, Willard strives for perfection: each word should be just right.
Previous articleA Quiet Place Part 2: Could a Sequel Happen
Next articleWill Ferrell Turns 54: Celebrating An Icon