My Octopus Teacher: Making A Name For Inspiring Documentaries

My Octopus Teacher tells the story of a man who found inspiration in nature when he was at his lowest. The documentary is one that has managed to captivate people across the world ever since it came out and has gone on to be acclaimed for the work that has been put into it and the riveting story of man’s relationship with nature that it tells. Since then, the documentary has been a part of the news and has been a subject of discussion for many people. But what exactly is it about this documentary that makes it so special? These are the questions people would ask when they hear about it. And they deserve all the answers.

A wildlife documentary to some, and a tale of man’s relationship with nature and rediscovering his connection to others, My Octopus Teacher is one that strikes many check boxes in one go. And there is nothing here to stop you from making your own interpretation of the documentary. The extent and complexity of it are just divine in itself and that is what really makes it so special and relatable to the people that have watched it. By now you must be wondering what this documentary is actually about and why we are talking about it today. So without much further ado, let us get right into the discussion.

Read more: Have You Watched The Harder They Fall Yet?

My Octopus Teacher: About The Documentary My Octopus Teacher is a documentary centered around South African documentary filmmaker Craig Foster. Now his is a name that needs no introduction to most documentary enthusiasts. He is a well known name in the industry and has been involved in some really good work. But sometimes that work comes in the way of life, and it affected Craig in a really bad way. Craig was suffering from immense amounts of stress and it was impacting his health and his relations with his family adversely. Things got to the point where he simply had to do something, and that is when he decided to embark on the journey My Octopus Teacher is about.

Directed by Pippa Ehrlich and Dan Schwalm, with production credits going to Craig Foster himself, My Octopus Teacher talks about Craig’s experiences at a cove that he decided to retreat into after his mid life crisis. This cove was one that he had explored as a child, and he went back to it to find the magic and bring it back to his life. There, by chance, he met up with the female octopus that eventually went on to be featured in the title of the documentary. Over the course of almost a year, the octopus and Craig developed a close relationship where he understood more and more about her and got to know her. It was his connection to nature which he rediscovered with her.

Throughout the documentary, Foster talks about his relationship with the octopus, and how she gave him a new outlook on life. It was sort of a divine and eye opening experience for him. He takes his time to relate the way his life turned out and how he could relate everything to his younger days and talks about the ways that life used to be different back then, while talking about how all of it takes him back at the same time. He tells the story of the time when the waves were so strong they knocked down the door of the bungalow that he resided in and flooded the entire floor. He also talks about the time he and his brother got together to make their first picture back in 2000. And it is experiences like these which make you feel a connection to him as he narrates his emotional story. 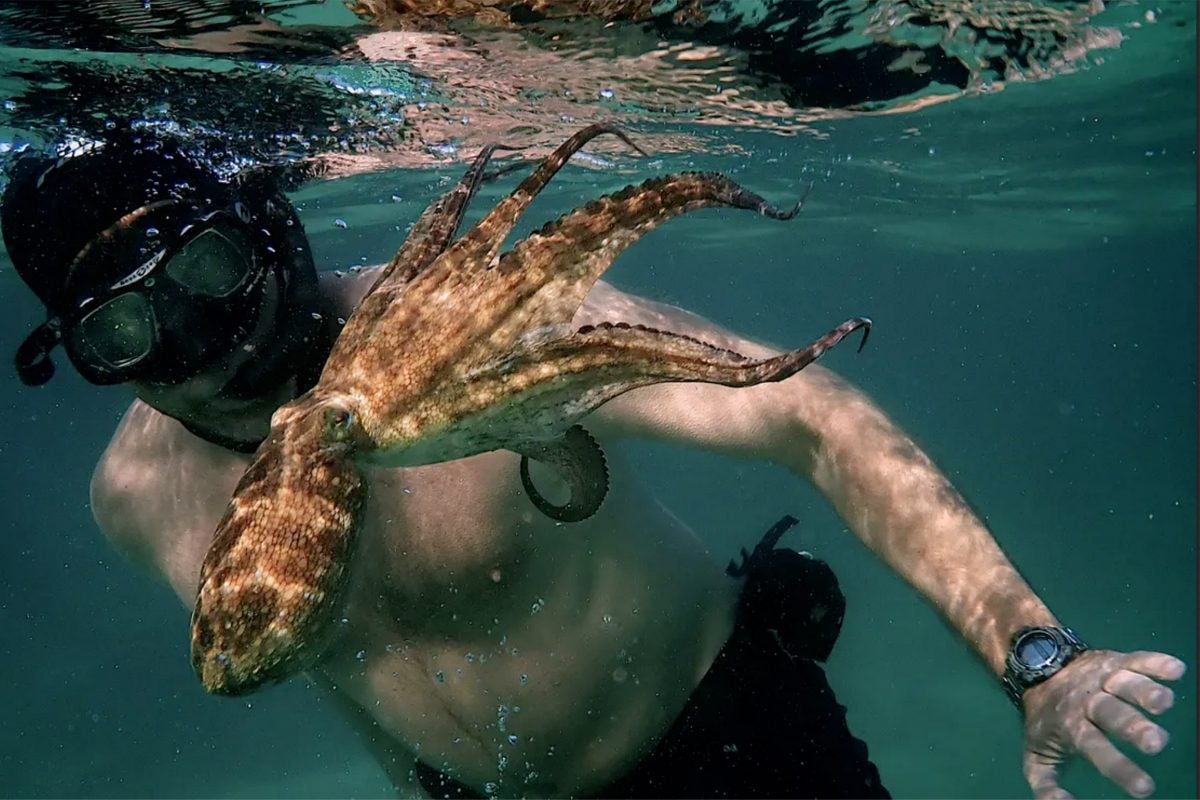 He switches between the way things were and the way they are now and takes us on his present journey and how it all started. With his high stress lifestyle impacting him and his family negatively, he took the radical decision of revisiting the past and going back to mother nature to rediscover himself. This is one of the best things about the documentary as he narrates how it was all really difficult at first, coming back to the cove he discovered as a child and going back into the water. It was a learning experience all over again and it is these moments that build a sense of human connection with him. But at the end of it all, he considers all of the troubles to be worth it, which is driven home by the visuals he shows us, giving us a chance to view life from his perspective.

There is a lot to like about My Octopus Teacher, and the least isn’t the relationship Foster builds with the octopus over the course of 11 months. It is something that is rather beautiful as the octopus too learns to associate with him and grows comfortable with him. In a way, she teaches him and makes him rediscover his happiness and his connection to mother nature, and that is what the essence of the document really is. It is one that fans of wildlife documentaries are going to eat up, and it gets the seal of approval.

Coming to the end, there is a lot to like about the Octopus Teacher, but it will not do it justice to simply read about it. So I highly recommend you to watch the documentary if you are a fan of documentaries and accounts of people in general. It is one that I personally loved, and I’m sure it will be revered for ages to come.

My Octopus Teacher is currently streaming on Netflix. You may check it out at the following link:

Watch My Octopus Teacher on Netflix

The documentary currently holds a rating of 93% on Rotten Tomatoes, based on multiple critic reviews. That is quite an amazing rating and means high critical acclaim for any documentary.

What do you think about the documentary? Do you like it? Did you relate to it? Let me know your thoughts in the comments down below.

Stay tuned in to the Franchise Hound to find out the best documentaries and to stay in touch with the latest in the world of entertainment.

Willard Grosshttps://thefranchisehound.com
Willard Gross is a content writer with an eye for detail. He loves to write and create, but he also enjoys reading and analyzing the work of others in order to critique it. With every sentence he writes, Willard strives for perfection: each word should be just right.
Previous articleLet’s See What is There In the Dark Season 3
Next articleLet’s Take you Through “In the Dark Season 1”