No Sudden Move: The Movie Review

No Sudden Move is a breath of fresh air in the current state of the movie industry. It brings the old days back with the gangsters, the mafia, and the lying deceit that is around every corner of the story. Even the story itself is set in the 1950s. It is the epitome of 1900s crime dramas. And we’re here to see it all.

No Sudden Move is Steven Soderberg’s brainchild of years of brainstorming and experience with crime and mystery. The movie is one of Soderberg’s finest yet and there is not a lot that we have to complain about. So what is it about the movie that makes it so good? And what’s the movie really like beneath the surface? If you’re interested in learning more about the movie, keep reading this article to find out what it is really about.

No Sudden Move: The Review

No Sudden Move is a very peculiar film in many ways, and doesn’t really disappoint at any one point in time. The movie is more than what it seems about at the beginning. And the plots gets thicker as the movie unfolds further and further. It’s a complex movie, no doubt. With the characters constantly lying to one another and pulling each other into a web of deceit, it gets hard to keep up with the lies and soon enough you don’t even know who is telling the truth.

Even the characters themselves are unsure at times about their own truth. The movie story goes on as the characters tread deeper and deeper in the crime territory. One thing leads to another and nothing really goes the way it was supposed to. Our characters find themselves doing things they never thought of.

And that is really what brings the movie its own charm. It is not afraid to be unabashedly itself. Soderberg went all out with this one, and created the movie that he really wanted to create. At times, No Sudden Move can seem like a movie that has lifted the plots straight out of the best crime movies of 1900s. And maybe that is a good thing, because the film is certainly an inspired one, but at no point does it seem like one that is copied from another. The movie takes place in Detroit, and that plays a huge deal into the story. The story goes on as Matt’s family is taken at gunpoint and he is forced to get documents from his own office to ensure his family’s safety. 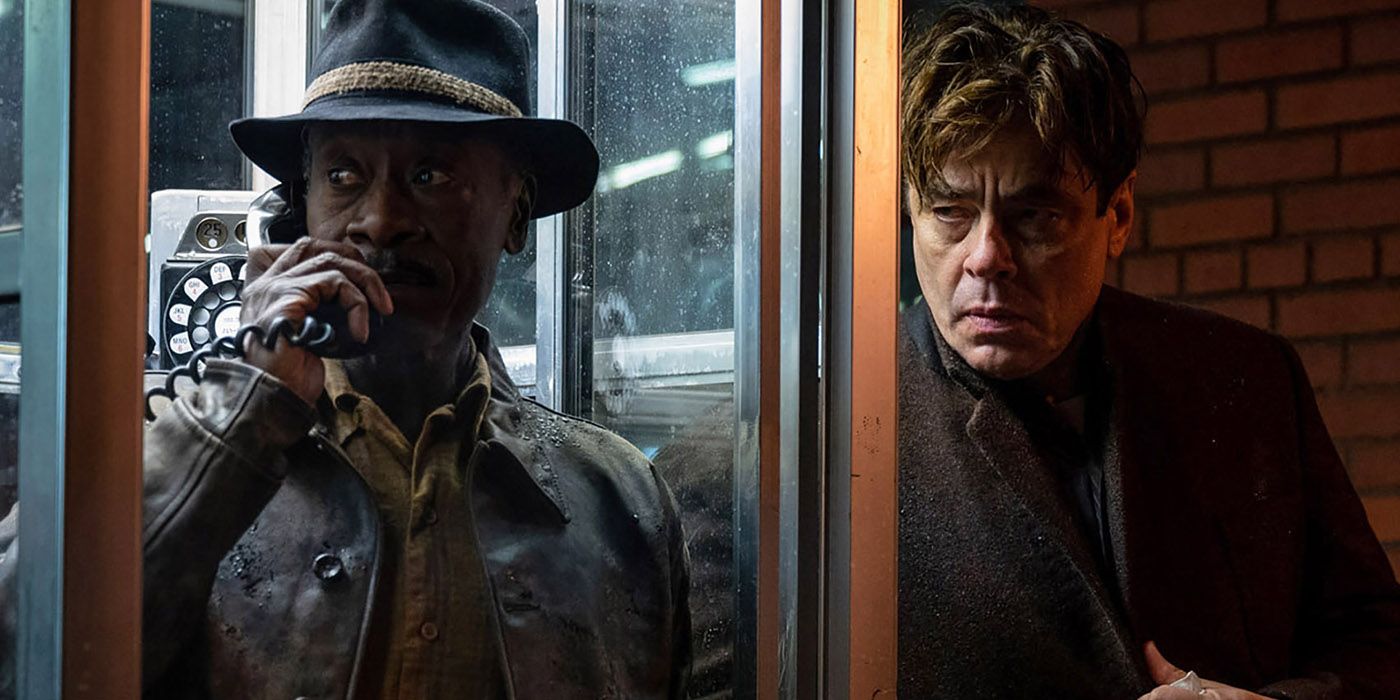 In the beginning of the movie, everything can seem a bit one dimensional and it can seem that the story is only focused on the narrative of the three men that have stormed the house of Matt and his family. But the movie surprises us at every turn and twist as the plot delves deeper and deeper into the everyday politics and happenings and we get a deeper perspective into the plot of the movie. And that is something that we really love about the movie. The plot never tends to get boring and delves deeper into things than most of us viewers would ever expect it to.

It’s not a very easy movie to follow either. Each character has their own motives and things that are driving them to do what they are doing. And at first watch, it is not easy to make things out and really be on track about who is doing what and why. All we really know is that blood will be spilt, people lied to and deceived, and we are all here for it. We give No Sudden Move a full hard recommendation from our side.

You might be wondering where you can catch a glimpse of the new movie. Well, you can watch the movie right now at HBO Max, given that you hold the necessary subscription.

Willard Grosshttps://thefranchisehound.com
Willard Gross is a content writer with an eye for detail. He loves to write and create, but he also enjoys reading and analyzing the work of others in order to critique it. With every sentence he writes, Willard strives for perfection: each word should be just right.
Previous articleSweet Magnolias- Confirmed Release Date, Latest Updates And More
Next articleLEGO Batman Movie 2 Was In The Works, And It Could’ve Been Phenomenal