If you’ve been in the smartphone market for a while, then you would definitely know about Realme. The brand has been around for a few years now and has slowly been making its name in the market. A subsidiary of BBK Electronics, Realme is one of the brands that has contributed to the success of the coveted OnePlus.

However, so far, the brand has been living under the shadows of its sister companies, only bringing out mid-range phones targeted toward Asian markets. But things are changing, and the Realme GT 2 Pro is proof of that. The company is finally bringing out a true flagship for a less than true flagship price, and it is doing it well.

If you’re someone who is looking to buy a smartphone in the upper-middle range of the price spectrum, then the Realme GT 2 Pro might just be one of the choices that you could be looking at, especially if it is available in your region and is well supported there.

So far, Realme phones have managed to offer a good blend of specifications and reasonable prices to its customers in the lower middle range. But this is a territory that the brand simply isn’t comfortable with, unlike bigger brands like OnePlus or Samsung. So it has quite a bit of competition to go up against.

So if you’re wondering whether the Realme GT 2 Pro might be the right choice for you, keep reading because we are going to tell you why exactly you should or shouldn’t buy this phone.

Read more: Philips Air Purifier: Should You Buy One?

Realme GT 2 Pro: What It Is

When you look at it from the surface, the Realme GT 2 Pro seems like any other flagship phone on the market. The spec sheet is relatively competitive, the camera system competitive, and the performance that the smartphone offers for the price is simply phenomenal.

But what truly separates it from the rest is the price that it comes for. The Realme GT 2 Pro sports the same processor as most flagships that retail for more than a thousand dollars, but it does so at an incredibly lower price.

You get the same flagship processor, the same grade of cameras, a phenomenal display, and everything else that you could ask for and that is essential for you at a price that is really hard to beat, even by other brands under BBK Electronics.

With Realme finally charting into flagship territory, you might be wondering what the catch is. And you would be right to ask that question because Realme is a brand that you might not have even heard of before. It is a brand that is largely centered around the Asian audience and caters to them primarily.

So it makes sense to ask the question of how they are able to offer incredible specs for a low price. And the brand image is the answer that most people would give. However, there are a number of other things that might be unconventional about this phone for you, like its user interface, or the fact that Realme has had to cut some corners here and there to bring the price of the phone down. Talking about the places where Realme has made compromises, the design might just be one of them. But that might be a very controversial thing to say because of the approach Realme has taken with the phone. The design of the phone is simply different than what we have ever seen before. It is not a simple case of comparing glass with plastic.

Rather, Realme has taken a different approach and gone with a biopolymer panel for its back. This is something I have never experienced on a smartphone before and to be quite honest, it feels amazing. Realme says that they went with the new design to reduce carbon emissions during the manufacturing process and to keep nature in mind. The biopolymer back is paired with a metal frame and provides a rather sturdy design to the phone.

In fact, the phone feels better in hand than many of the glass back handsets that we have used before and the fact that it is so durable provides peace of mind that one simply doesn’t get on phones with a glass back. What makes the deal even sweeter is that the phone feels really good in the hand. The textured back finish feels rather amazing and makes the phone a joy to hold.

It is more grippy and the phone will not fall out of your hand as easily as it would with a glass back. While it doesn’t look the most premium phone out there, it still feels pretty good and it might not even matter to you once you slap a back cover onto the phone. 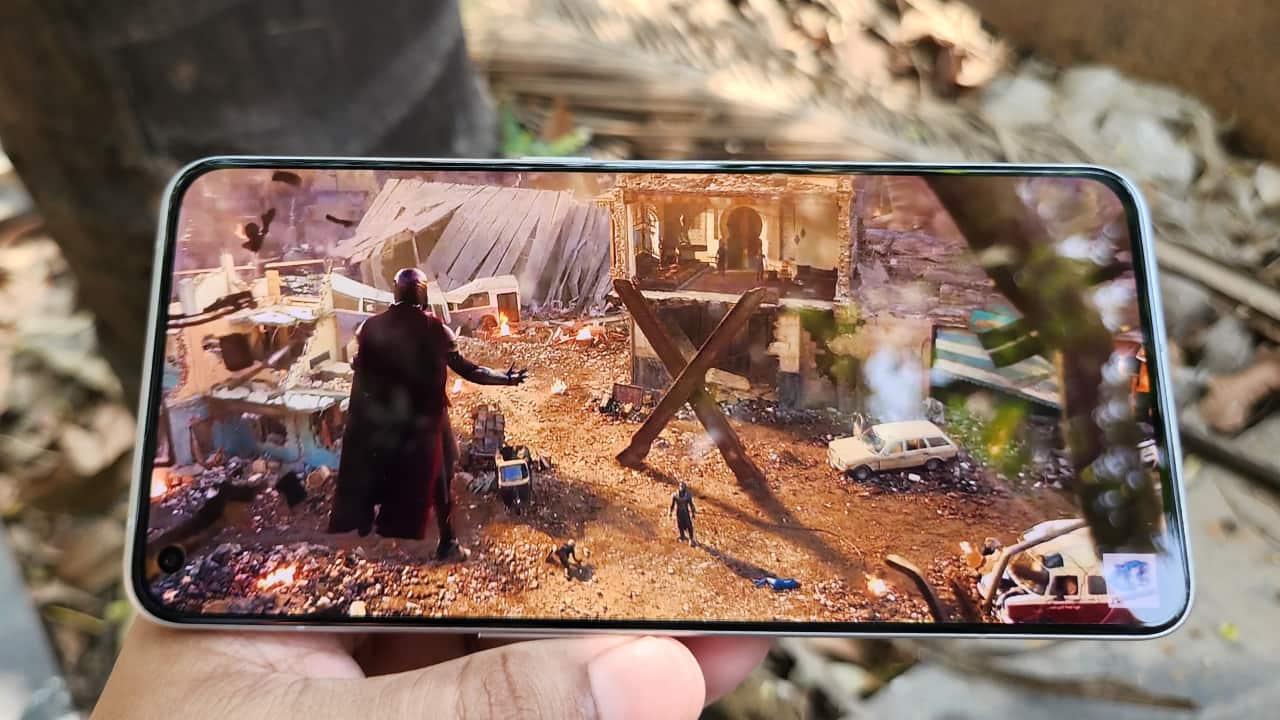 This is another place where Realme has made no sacrifices and gone for a finish that is simply stellar for the price. The new Realme GT 2 Pro incorporates a 2K AMOLED display into the small form factor with a 120 Hz refresh rate with LTPO 2.0 which makes the phone battery efficient and smooth at the same time.

The display can vary its refresh rate from 1 to 120 Hz depending on what is on the screen and help conserve the battery on the phone. With a touch sampling rate of 1000 Hz and the 120 Hz maximum refresh rate, the Realme GT 2 Pro provides an experience that is so smooth and fluid that it is simply difficult to beat. You will never feel a hitch and the user interface just flows smoothly as butter.

The display also goes up to 1400 nits of peak brightness which is a very good figure for most phones these days. The phone is even brighter than some of the more expensive phones that we have tested and performs amazingly in all tests. Sunlight visibility is phenomenal and so are the viewing angles. The display is one thing where the Realme GT 2 Pro simply outperforms itself and even the best in the industry.

Read more: Versa 3 Review: All About the Best Fitbit Smartwatch!

For a phone that comes at a really affordable price, the Realme GT 2 Pro outdoes itself in the performance department. Powered by the latest Snapdragon 8 Gen 1 flagship processor, the specs for the phone are simply top of the line, dwarfed only by the Apple chip.

Gamers will not feel a single hitch using this phone and the performance is simply phenomenal for the price. The phone has relatively good heat dissipation so the phone getting too hot is never an issue either. Running Android 12 with the Realme UI 3 skin, the phone performs rather smoothly and is really clean to operate, which is in stark contrast to the earlier UI by Realme.

The Realme GT 2 Pro also comes with 12 GB of RAM and 256 GB of storage, so you should be good on that end too. The phone should not give you any problems with everyday usage and you should have plenty of space for everything that you want to do. The 12 GB of RAM ensures that the Realme GT 2 Pro can handle anything you throw at it and that apps still load quickly and smoothly.

Read more: Google Pixel Watch: Rumors, Specs, and Everything We Know So Far!

Now, this is one place where Realme goes a little controversial. The Realme GT 2 Pro features an amazing primary sensor for its camera. The IMX 766 sensor powers the main 50MP shooter for the phone and is paired with two other secondary camera modules.

The phone features an ultrawide lens that is the same as the one featured on the OnePlus 10 Pro and takes rather amazing images but lacks autofocus. In addition to that, the phone also features a microscope lens that is intended to take images on a much deeper level. However, this seems rather futile and the phone could have easily been done without it.

There is no telephoto lens here and that is rather disappointing because that is something that we expect from flagship devices. The inclusion of a microscopic lens instead is a rather bold decision, and it, unfortunately, backfires here because it is more of a gimmick than an actual feature. On the whole, though, the Realme GT Pro 2 is rather good at capturing images, especially the primary sensor, and you won’t miss much except for the telephoto.

With that, we have to answer the question of whether this is a phone that you should buy. And the answer is that it depends. If you’re a gamer that wants the best performance at a reasonable price, then you simply cannot go wrong with the Realme GT 2 Pro which features top-of-the-line processing power.

But if you’re someone who is looking to buy a phone for photography, you will severely miss the telephoto lens here. Also, the Realme UI might not be for everyone, so that is something to keep in mind as well. Eventually, it comes down to what you want from a smartphone. The Realme GT 2 Pro offers a lot for its price, but it doesn’t offer everything.

The Opening of the Two Point Campus Has Been Postponed Until August.